Back to the land of orange trees (Andalusia) for a visit to Córdoba. 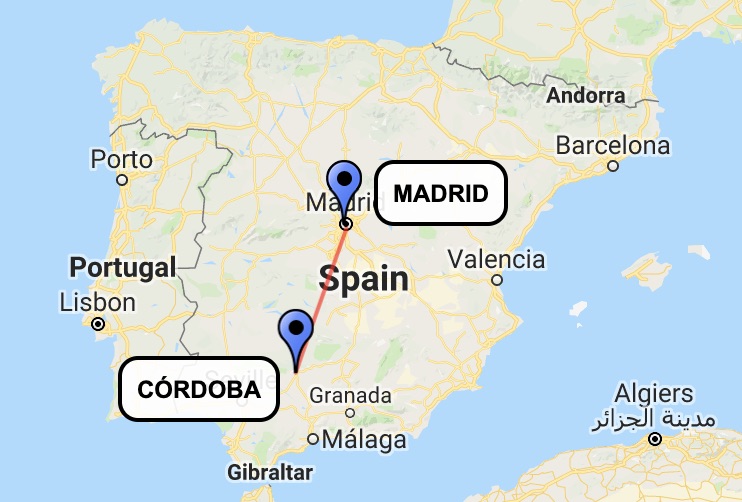 The main sights are:

I had booked a ticket a couple weeks in advance to see the Mezquita at night with a light show.

I arrived around 4pm on Saturday since the shorter trip didn’t justify a night bus.

This was the more authentic hostel experience I was expecting:

The tiny reception area (not pictured) was like walking into a Lewis Carrol book. 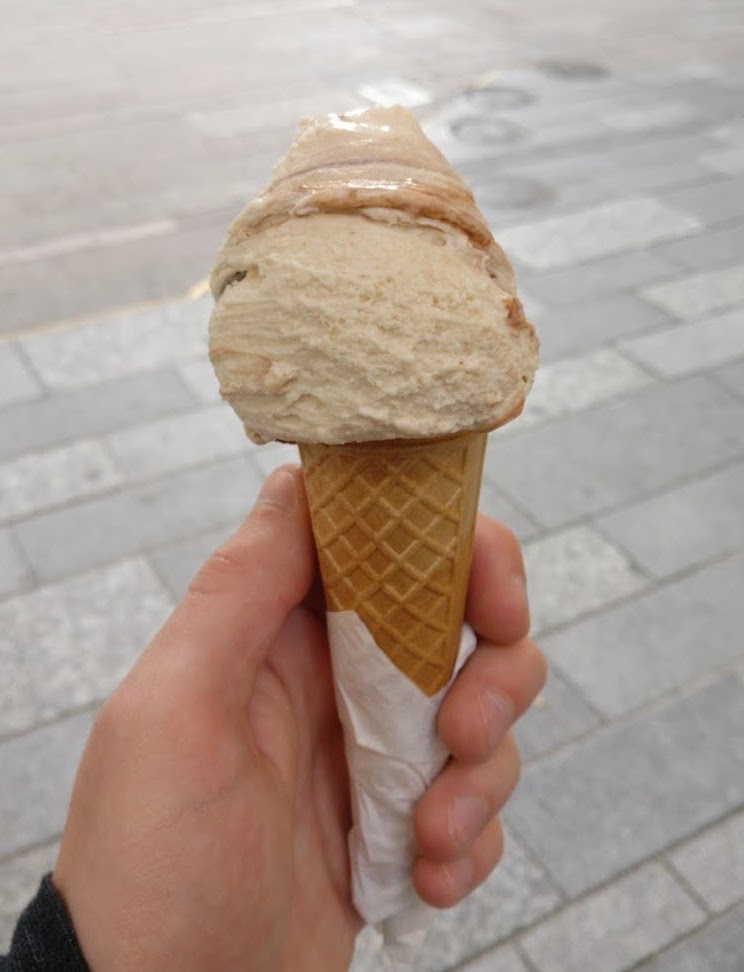 It’s warm in Southern spain (around 70 degrees). The ice cream shops were getting a lot of business. I gave a gelato shop a try. I just got what the guy in from of me got, which turned about to be an amazing Ferrero Rocher flavor.

I returned to the hostel for the free sangria and to meet the other residents. They also had a 4€ ‘Italian night’ dish cooked by a hostel volunteer that was a cheap and delicious pesto pasta. 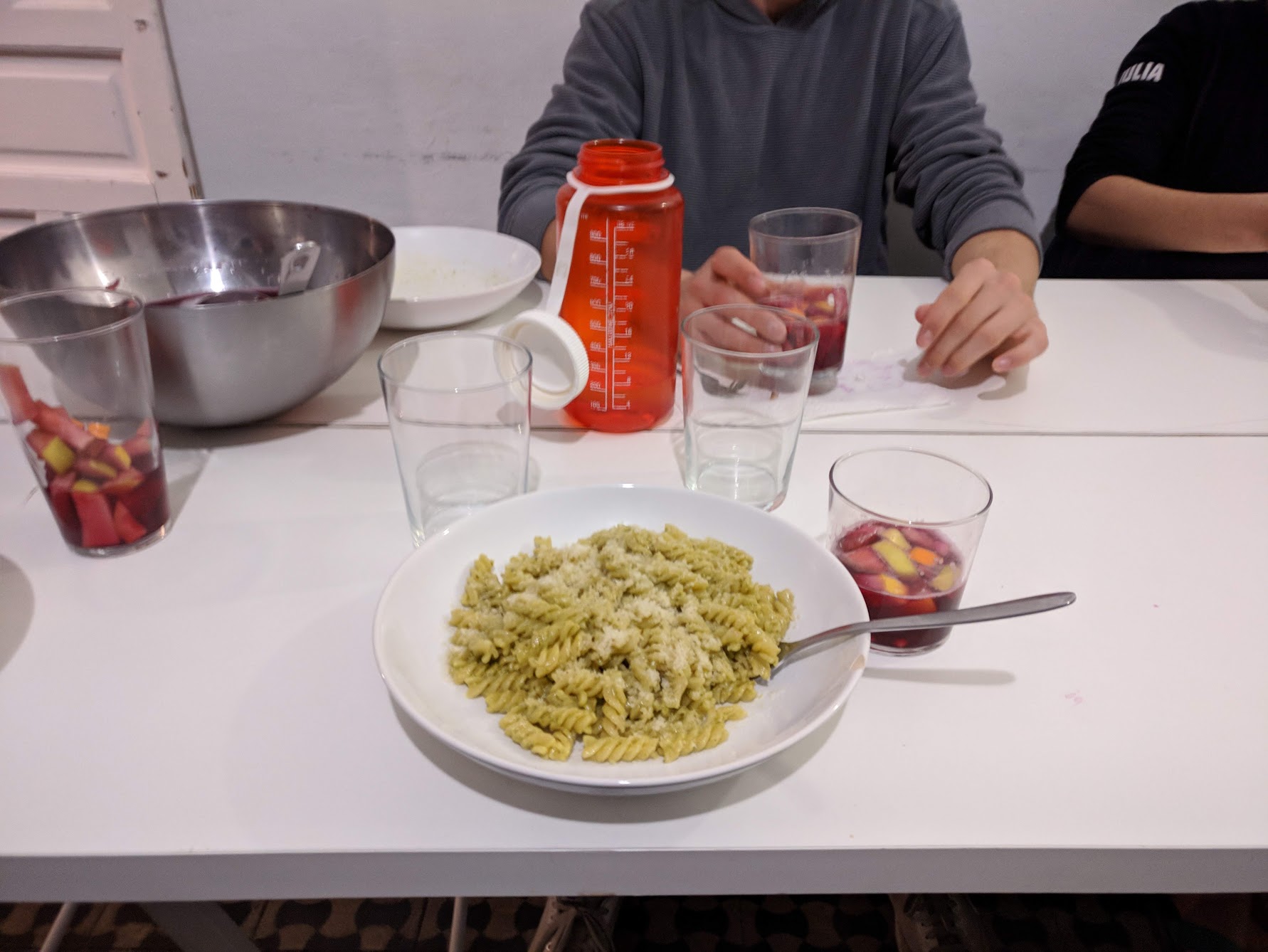 I met a people from the US, England, Argentina, Sweden, and more that I’m forgetting. There was even one girl from Getafe so she was very familiar with UC3M. The Swedish girl really wanted a hamburger so a bunch of people followed her to a place she found for dinner.

This place was hilarious. It was an American restaurant, which meant everything was superhero and star wars themed. This must be what Chinese people feel like when they step in a Panda Express. 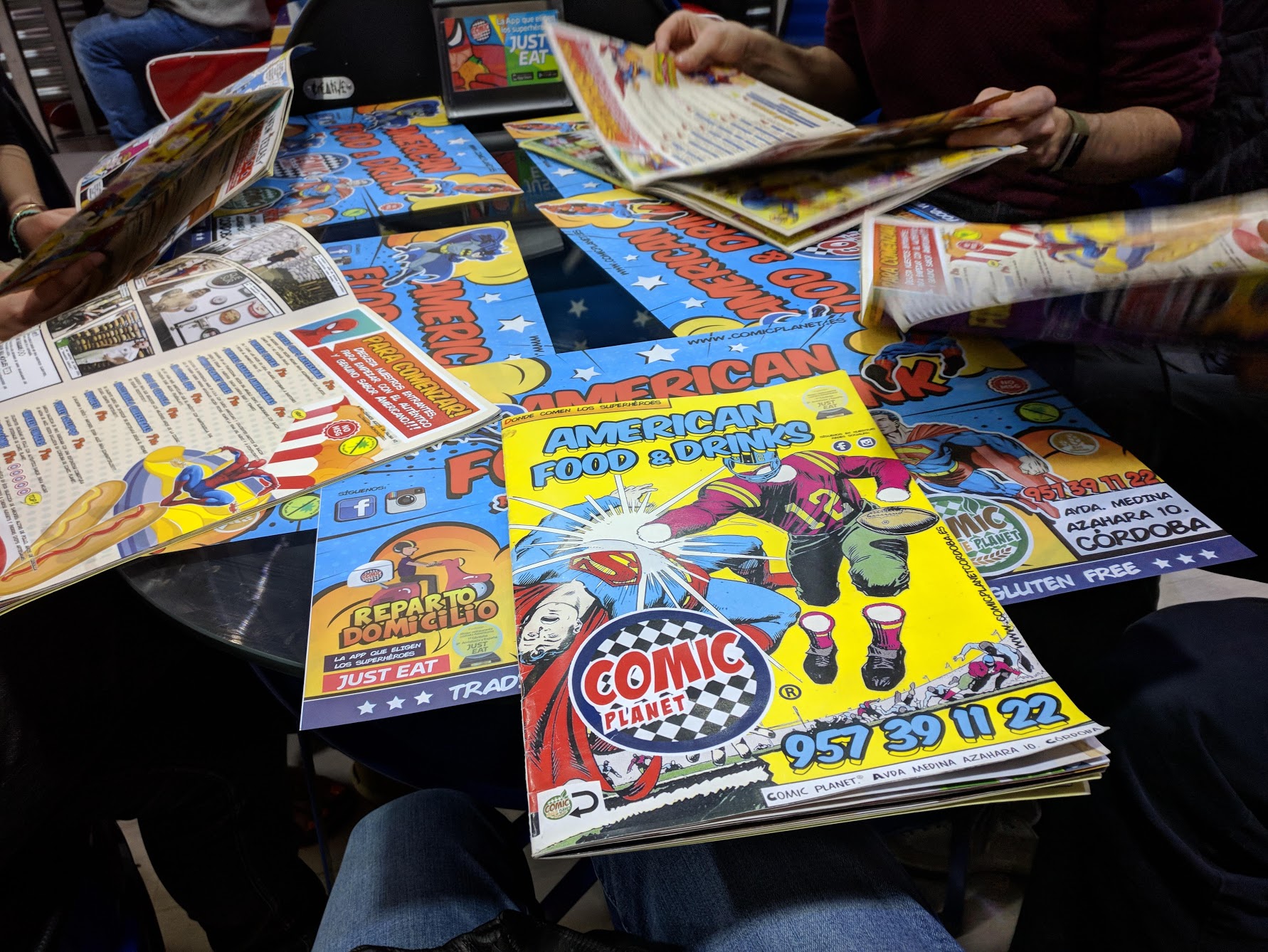 I only had time for an overpriced beer before I had to leave for my night tour.

I was rushing to get to my tour. When I got to the Mezquita I was running circles around it looking for an open door. Everything looked closed up. Panicking, I checked my ticket for an address and saw that it was scheduled for 21:30. I had put it in my calendar as 11:30pm but it had already taken place at 9:30.

I was so bummed. This was the one event that I had arranged in advance (and the reason for making the trip this weekend), and not only did I miss the special nighttime event, but I’d have to pay another 10€ just to do a regular visit the next day. To rub it in, the mosque is free every morning except for the one I’m here for. I dragged myself back to the hostel to at least get a good night’s sleep.

Started with a light breakfast of toast and (actually edible) oranges.

I wasn’t ready to admit defeat on the Mezquita visit. I arrived early at the ticket booth hoping to pull some strings. Conveniently, the guy working there didn’t speak English. I had to explain my situation in Spanish and pleaded with him to let me in with the expired ticket. I waited for him to call a supervisor, and eventually he gave me a new ticket for a day visit. This made me feel better about my screwup.

check out the 360 degree view

Very cool mixture of architecture styles as different cultures gained control of the building. The Islamic style was most interesting to me.

I found a seat in a bar far from the tourist hub and tried some Córdoba specialties.

I had a number of coincidental encounters this day.

While walking around I ran into: 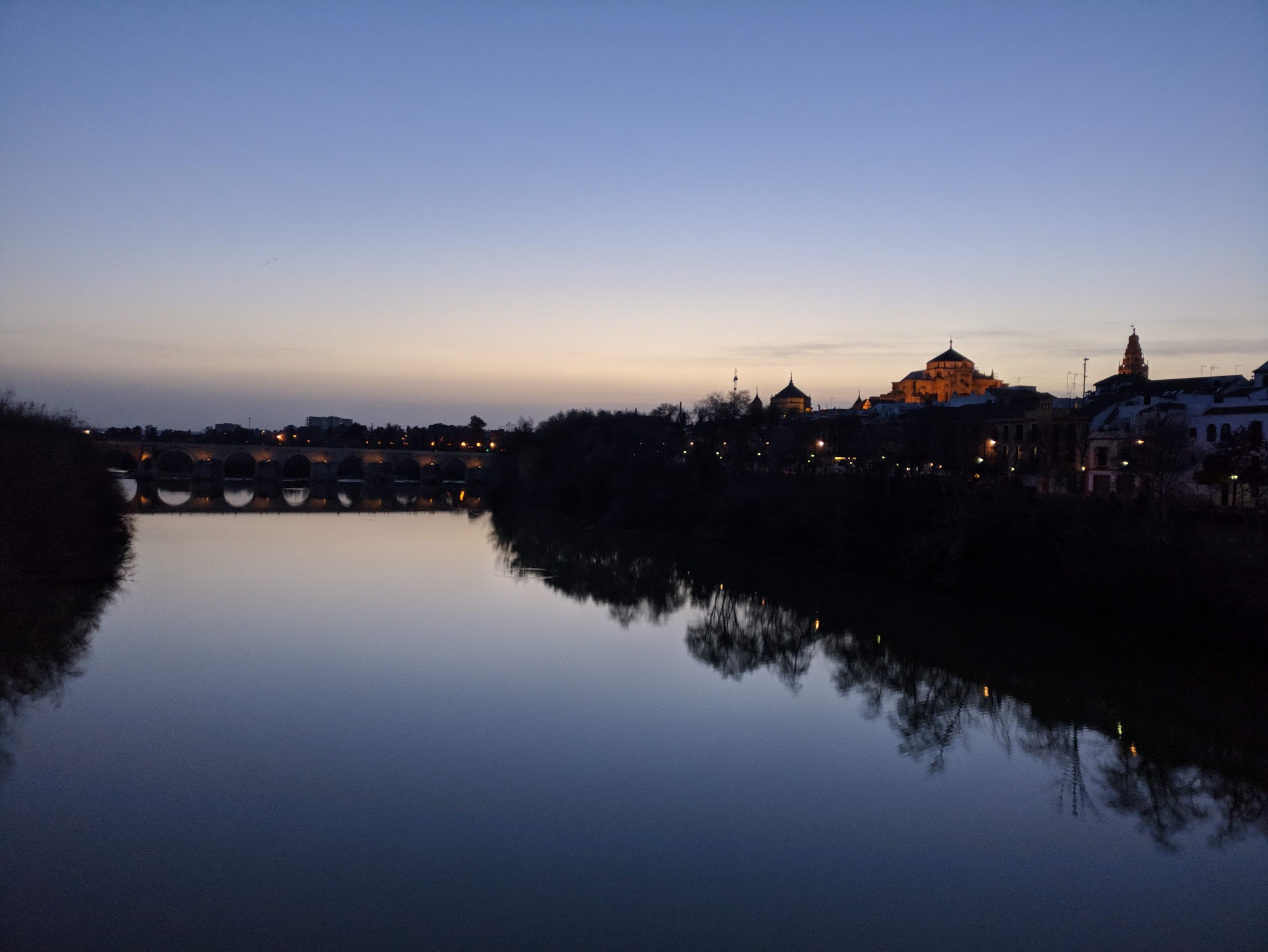 beatiful view of the city over the river

More free sangria with some new faces tonight. A couple of German guys, a Dutch guy, and two American girls working for the Navy stationed in Spain. We headed to a marketplace with a variety of dining options. 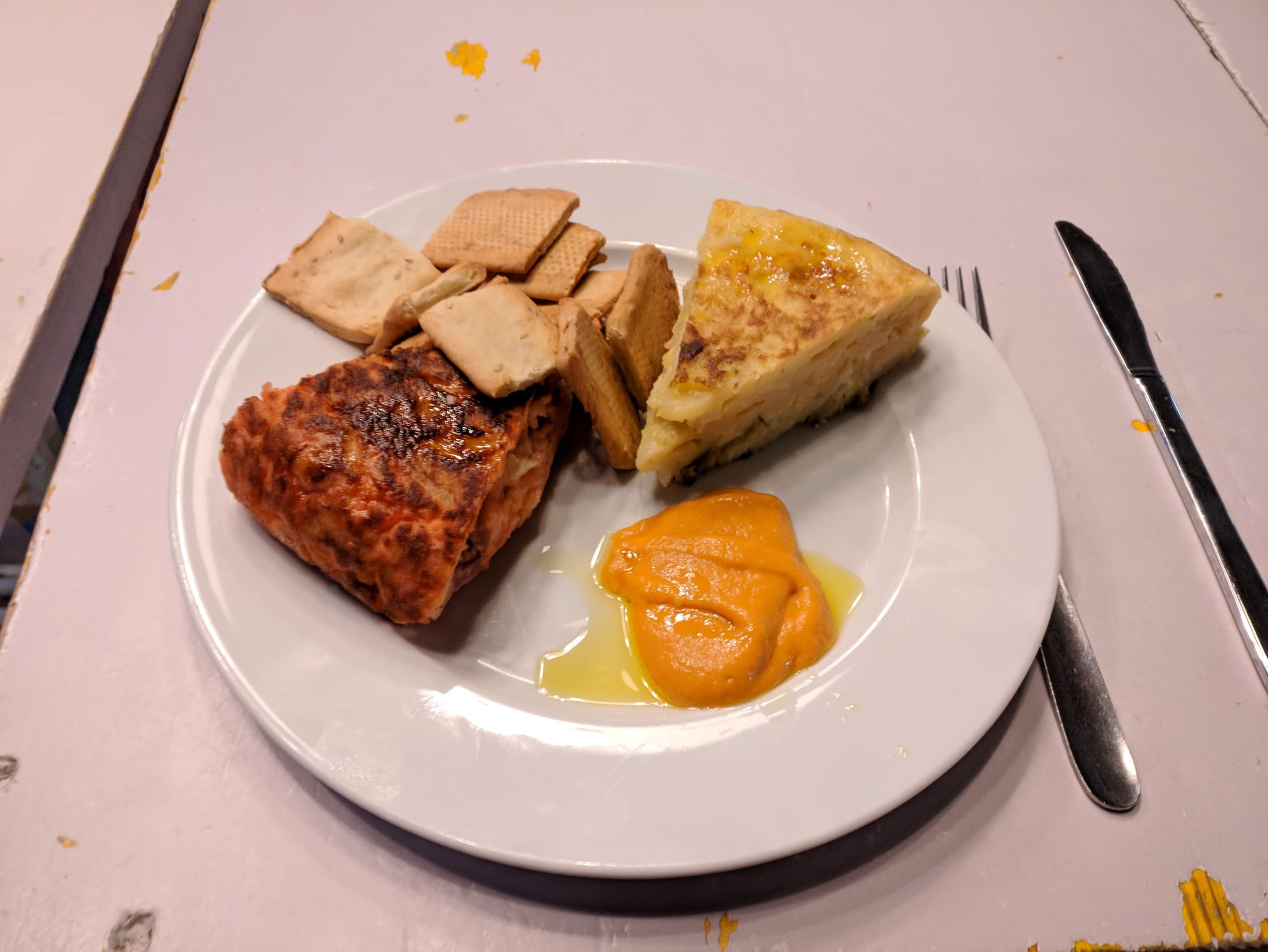 David from Jerez said tortilla is a Spanish staple so I tried two kinds, both were good.

I judge the tourism level of cities with my patented Despacitometer™. If I hear a street performer playing Despacito then I’m in the wrong place. Toledo and Córdoba have received poor marks on the Despacitometer™.