Night is whispering. Drum beat and fire’s glow swallowed behind the dunes. Sinking strides in a careful line, stained by blinding moonlight. The expanse beckons. 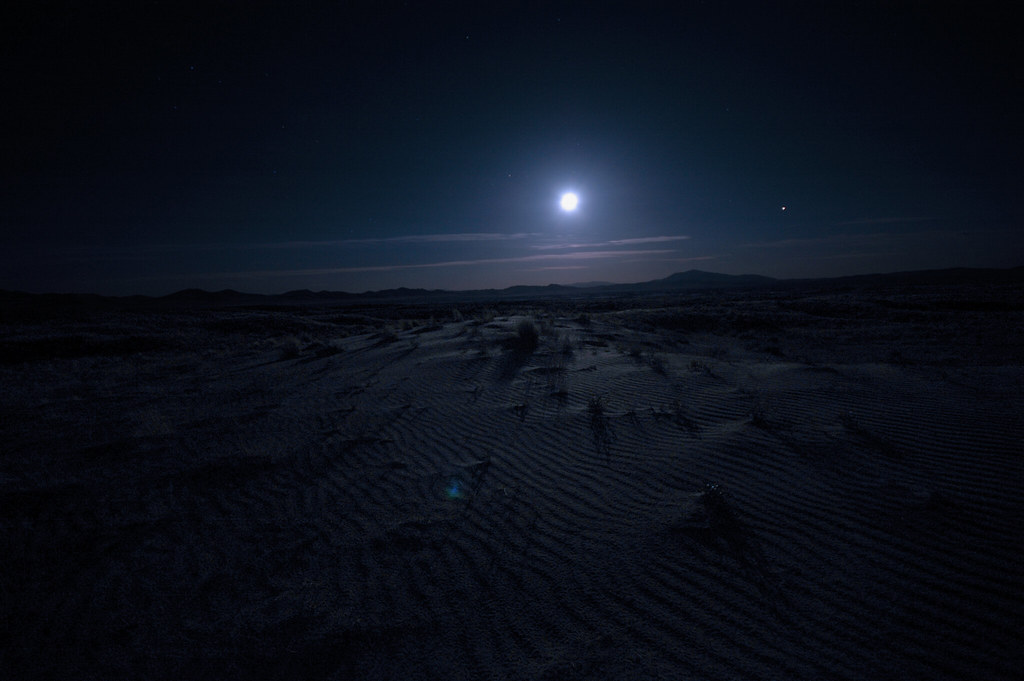 Play this backing track to set the mood: 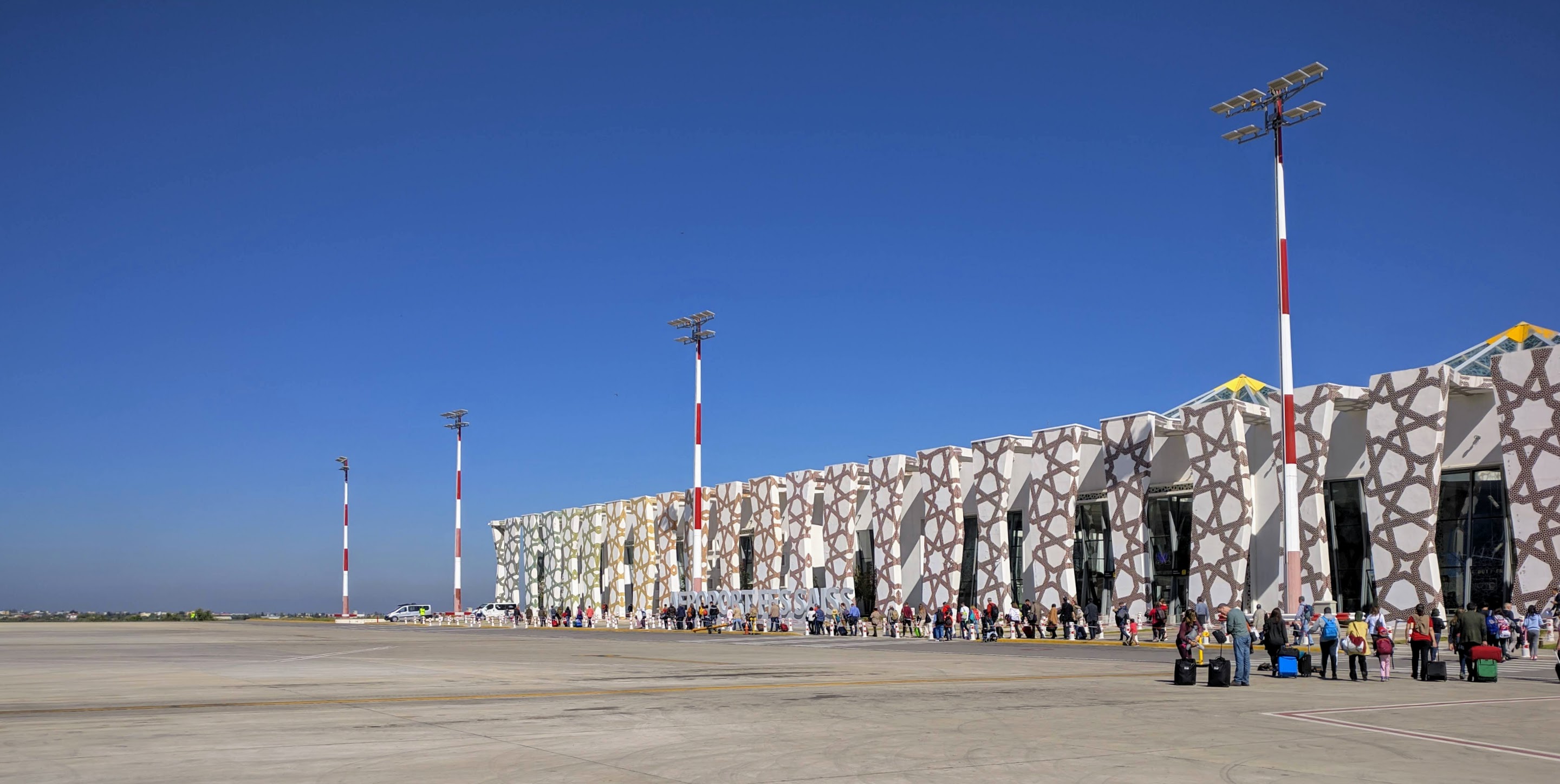 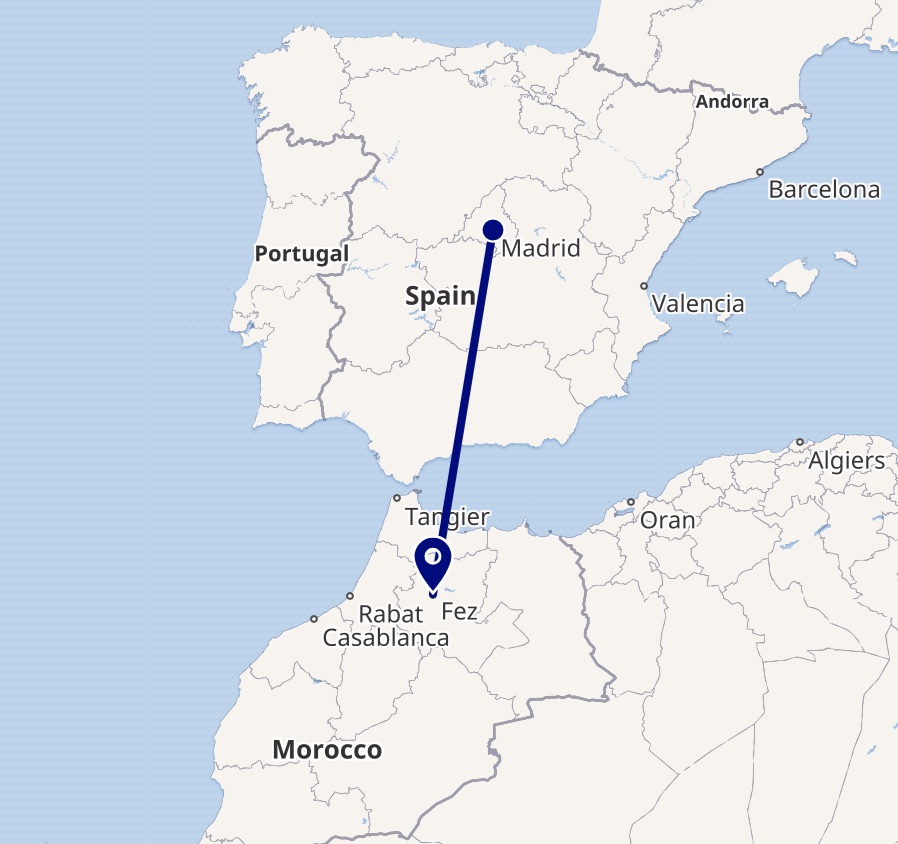 It quickly became apparent I was in a very different country. Our drive back from the airport was decorated with pack mules, sheep herds, Mad Max-esque motorbikes, and civilians sporting winter jackets in 70+ degree weather.

Traffic laws were not strictly enforced. Drivers seemed to be aiming for the lines rather than the space between them. 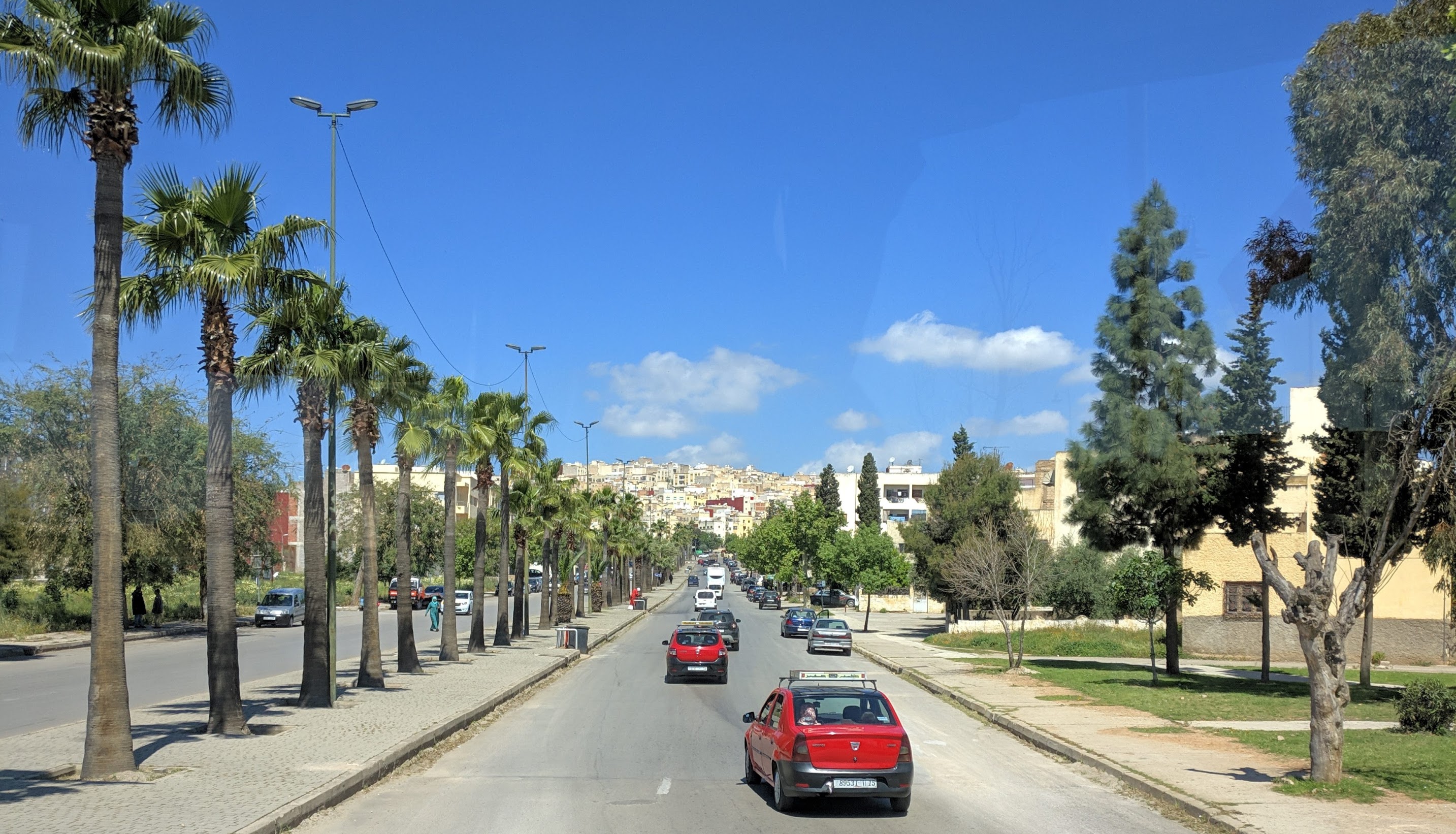 In Spain, you can’t walk two blocks without finding a green glowing cross marking a pharmacy. I was quite amused to discover than this pattern has been replaced by the more Islamic glowing crescent moon in Morocco. I guess I didn’t consider the medical cross holding religious connotations.

We stayed in a “5 star hotel”. The lobby was certainly impressive. The rooms and meals not so much. Our 3-person room wasn’t fully made and the toilet was more of a smoothie maker. 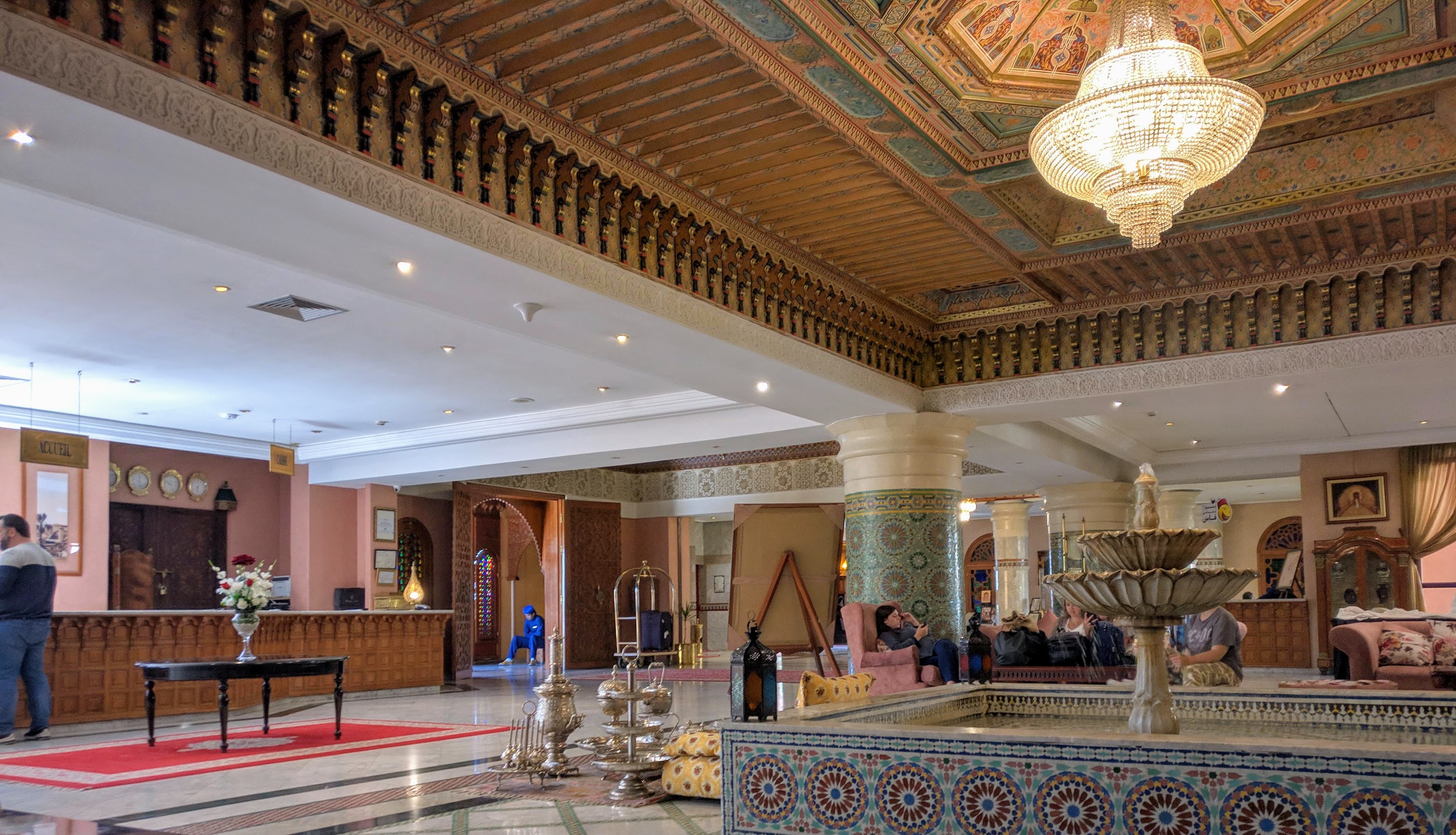 Spot our tour guide on the left, "Hash", rocking that Obi-Wan look

Hash pointed out some white grave markers for Jews. As he described the area, “easy come, easy go”. Not a big deal to re-use burial grounds. 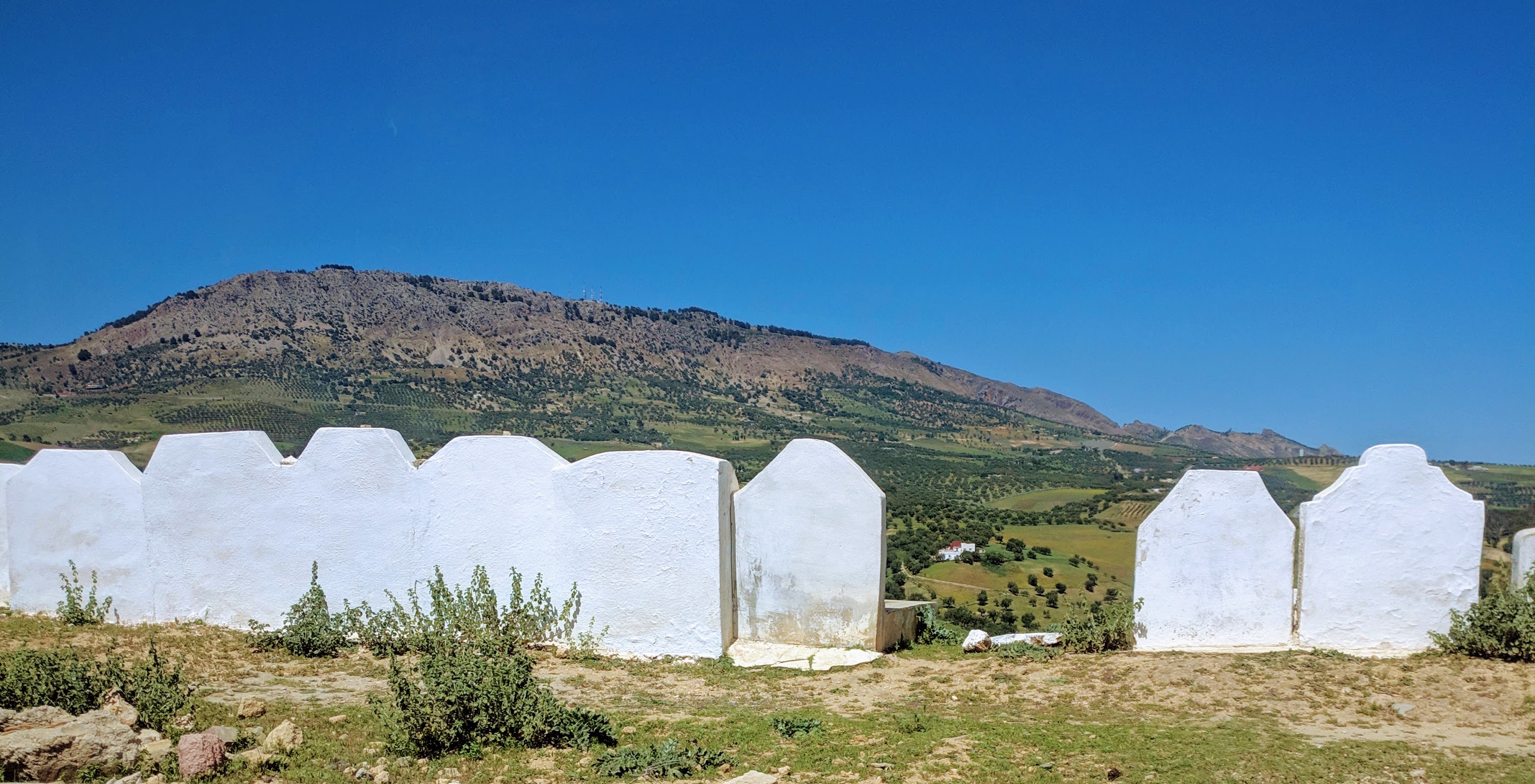 The potter was whipping up pots, vases, and tajines like nobody’s business. Onlookers gasped as he swiftly ran a wire through the base and popped off each finished product.

Pretty impressive too to see them chip away at the little interlocking tiles by hand and glue them in backwards to assemble the colorful panels for fountains.

Lunch on our own after the tour. I went with a group of people to a nearby shawarma / taco place. I just bought some fresh OJ to go with my peanut butter jelly sandwich, but everyone else’s stuff looked really good too. The staff was extremely friendly and the prices were dirt cheap (10 dhm for my juice, 30 for the sandwiches).

This was my introduction to the vast world of Moroccan juices. It’s pretty typical for places to serve fresh:

Banana and avocado were more like a milk than a juice, but not thick like a smoothie. Slightly sweet, and very creamy. I definitely will be making banana juice when I get home.

The other famous Moroccan drink is mint tea, which is served with lots of sugar.

Moroccan dirhams are the currency here, not to be confused with UAE dirhams. The conversion is easy: divide by 10 to get the euro equivalent. Some places even accept euros using this method.

The ISA minimum recommendation to bring was 1000 dhms. I’m not sure how they got that number; I brought 800 and felt like I could’ve used less.

The official languages are Modern Standard Arabic (a formal, generally unspoken language akin to Latin) and Berber. However, the ones that I encountered primarily were:

Some people only spoke Arabic and French, some only Arabic. Some spoke many more languages, because Moroccans are businessmen who must speak with people from all over.

I was able to re-learn enough French to get around the markets. As Arabic dialects differ so much I resorted to Google Translate for communication in the more traditional areas. Learning the script at least was helpful for allowing me to pronounce things and type them into my phone.

Curiously, in Arabic, Fez is written like “Faas”. The “a” (alif) letter seems to be really flexible as I found it taking the place of an “a”, “e”, or “i” sound in different words.

The French pastries looked really good… except for the thick coating of flies and bees. I’d like to see the look on an American food inspector walking into one of these places. I decided to hold off on the food poisoning until the end of the trip.

Simply walking around was entertaining. I have never felt like such a foreigner. I fully embraced my tourist status and donned a very functional ball cap. Locals gawked at our foreign crew, and fascinated youngsters would happily greet us with a “bonjour”.

They are everywhere in Morocco. I saw as many cats roaming the streets here as I do squirrels in the states.

The Moroccan people are so friendly. The staff at the shawarma shop was particularly kind and accommodating to us. I later went back there to ask for tips on exchanging a shirt I bought. The woman working there was asking for my shirt size, prepared to give me one from her son.

When I explore, I gravitate towards tall things. I ran into some little kids while climbing up a nearby hill. They flagged me down to come over, and though they only spoke Arabic we went on a little hiking adventure together. Surprisingly, they lacked much interest in the caramels I offered them. We parted ways before the summit.

Five times a day, loudspeakers on all of the mosques call people to come and pray. These buildings were beautiful and plentiful. They served as convenient landmarks for navigation.

I had the pleasure of witnessing the entire city erupt in prayer calls at dusk at the top of the hill.

This place is a market maze. We were taught two important phrases.

What I came in knowing

What other students did

What our program managers should have done

Last picture is from the leather tannery, which smells so bad that they hand you a sprig of mint to hold under your nose at the entrance. Part of the reason for the smell is they harvest pigeon poop to bleach the leather.

You can’t drink water from the tap, likewise we had to avoid fresh produce which might be washed in it. I bought a 5L jug of mineral water and a smaller handheld bottle for a couple bucks which lasted me most of the trip.

Moroccan food is primarily yellow-ish stewed vegetables. They also have tasty round bread (10 cents, even cheaper than Spain), oranges, and bananas.

We went to a cultural show that included:

We headed south to Erfoud and then went off-roading to our campsite in the desert. 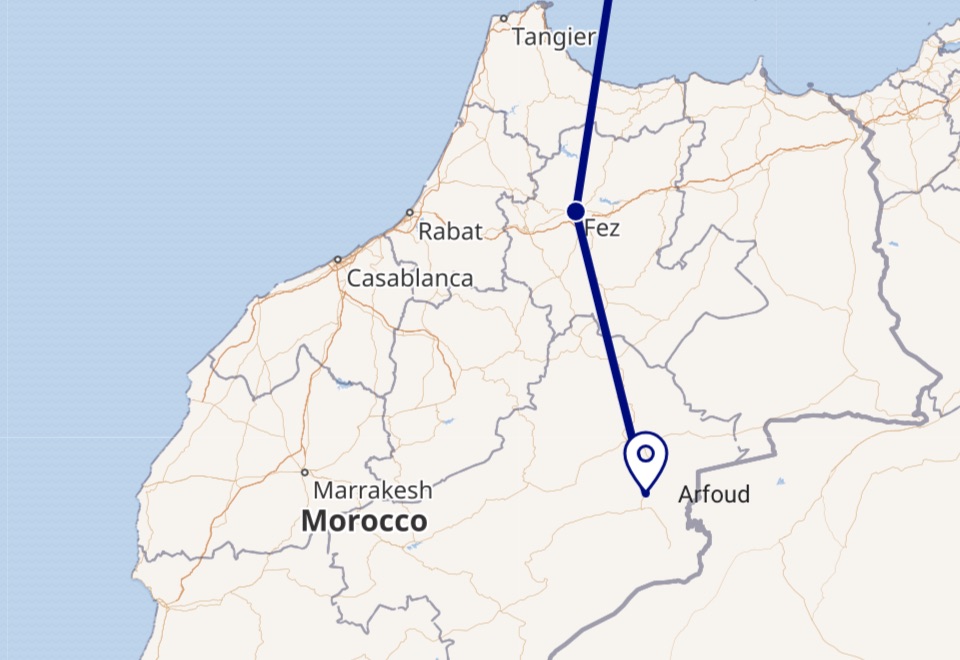 The day-long journey condensed into a minute:

The site consisted of:

The toilets were pretty disgusting and I was so thankful I brought baby wipes. They got water from big tanks nearby.

Our haimas (tents) and bathrooms

Panoramic view of the surroundings

I found some cool rocks out in the dunes that looked like plastic from all the weathering. I had to make sure not to mistake the hardened camel poop for rocks.

I also spotted some of the local wildlife:

Luckily I didn’t have any encounters with the massive spiders that I heard spooked some bathroom visitors.

The site was run by some Moroccans who functioned as:

They also continued the Moroccan tradition of trying to sell us stuff. The guides took us in small groups to see the sun rise, and afterwards they sat to to show us their “works” which were just more trinkets they wanted us to buy. They proceeded to sit pitifully in that one spot the entire day, making us feel super guilty as we sauntered off. I tried to avoid eye contact whenever I had to walk past to use the bathroom.

Sunrise over the Sahara

The food they made was AMAZING. Much more flavor than what we had at the hotels or other restaurants. Breakfast in particular was luxurious. The main breakfast food was msemmen, which was thick like a pancake but flaky as if made of layers of crepe. It was served with huge bowls of honey and jams. 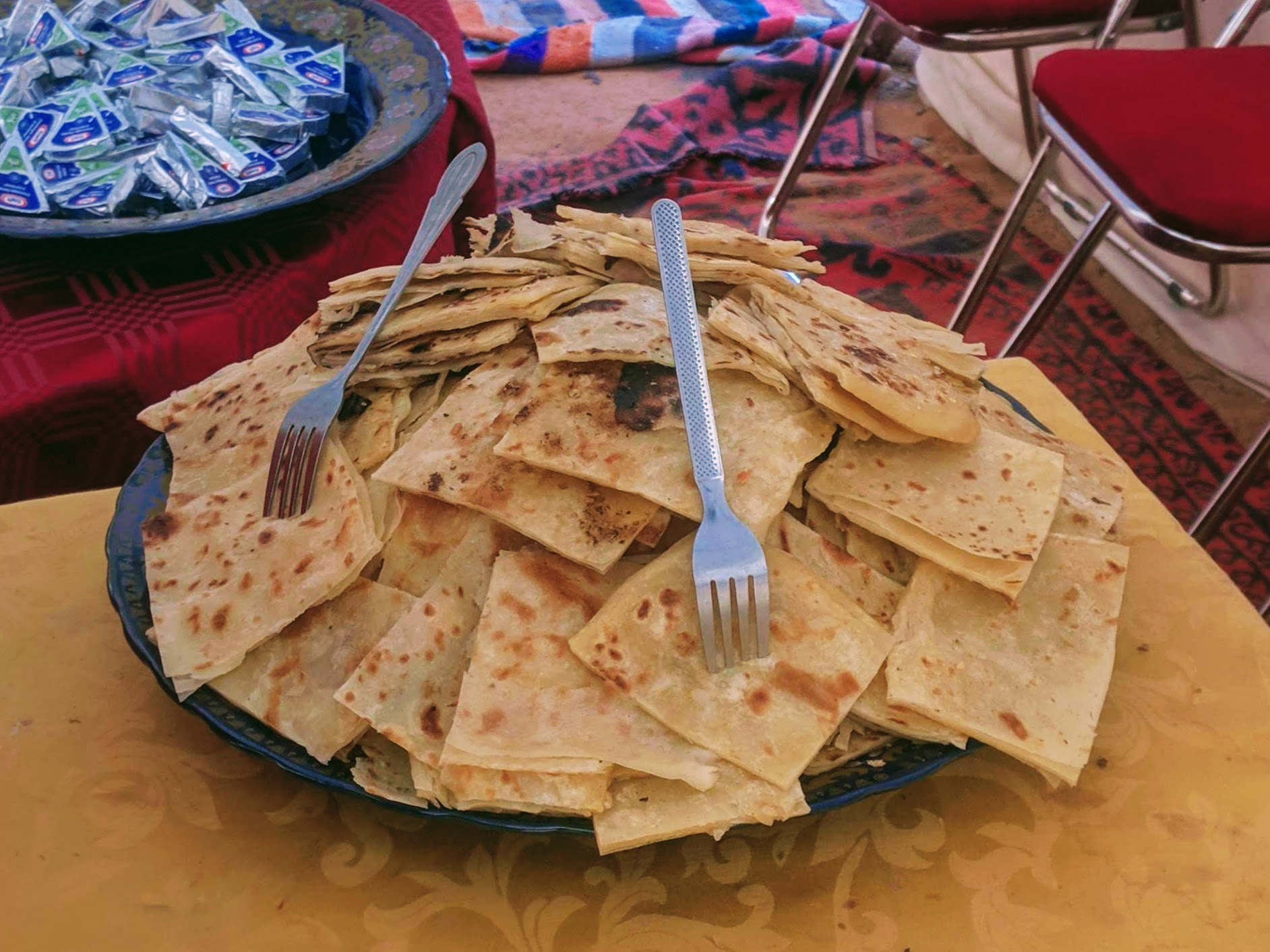 Somehow, they assembled a fleet of 70+ camels for us to ride. Camels are so weird. They look and act like Star Wars creatures, with their derpy faces and random screeches. This guy could work on his manners:

Does this kaftan make me look fat?

We made a pit stop to climb a massive dune mountain, which is really hard since it’s made of burning hot, slippery sand.

“Hey man, where are you going with all those camels?”

To a pool, of course!

Believe it or not, most people just sat around the edge because the water was too cold.

By far, my favorite time in the Sahara was at night. No, I didn’t really get to appreciate the stars—the moon was too bright. But the feeling of walking barefoot along the cooled dunes, alone, into that vast emptiness, was just surreal and haunting. I loved wandering away from camp and sitting down, grabbing handfuls of that soft, fine sand and letting the wind whisk it away. Very meditative.

Back at camp, the Moroccans were putting on a show.

Our last stop was close to Fez.

Unlike Fez, we were given free time to explore the old city and markets

Everyone in the group was too scared to go into the market for fear of getting lost. I think they’re a bunch of babies. This was our last stop and I had dirhams to kill so I went went on my own. There were a couple of things I specifically was looking for:

In Fez at pharmacist stop of the tour, they showed us this bright green lipstick that changes to a normal color when you apply it. Seemed like a fun gift. I found it for 5 dhm, a sixth of the price that students paid in Fez.

Just something cheap since I didn’t have any in my room. Found some for 50 dhm, although the guy insisted I buy a pair that he claimed was exactly my size, but is definitely too small.

I knew full well they were all fake, but at 40 dhm (after bartering) I’ll gladly take fake, fashionable sunglasses. I rolled my eyes as the shopkeeper insisted that the clearly plastic frames and slightly chipped lenses were original Ray-Bans.

This was a lot harder to find than you would think. I stopped at a number of spice shops, which with their bunches of dried herbs hanging out front seemed like the right place to go. Many of the owners didn’t speak French which made things complicated. One guy looked at the Arabic translation that Google came up with, and he led me far into the market to a stall selling fresh mint. I couldn’t explain to him properly that this wasn’t what I was looking for.

Eventually I found a spice shop owner who spoke some Spanish. He had some very sketchy, leaky boxes of tea behind the counter. I got a box for 10 dhm. 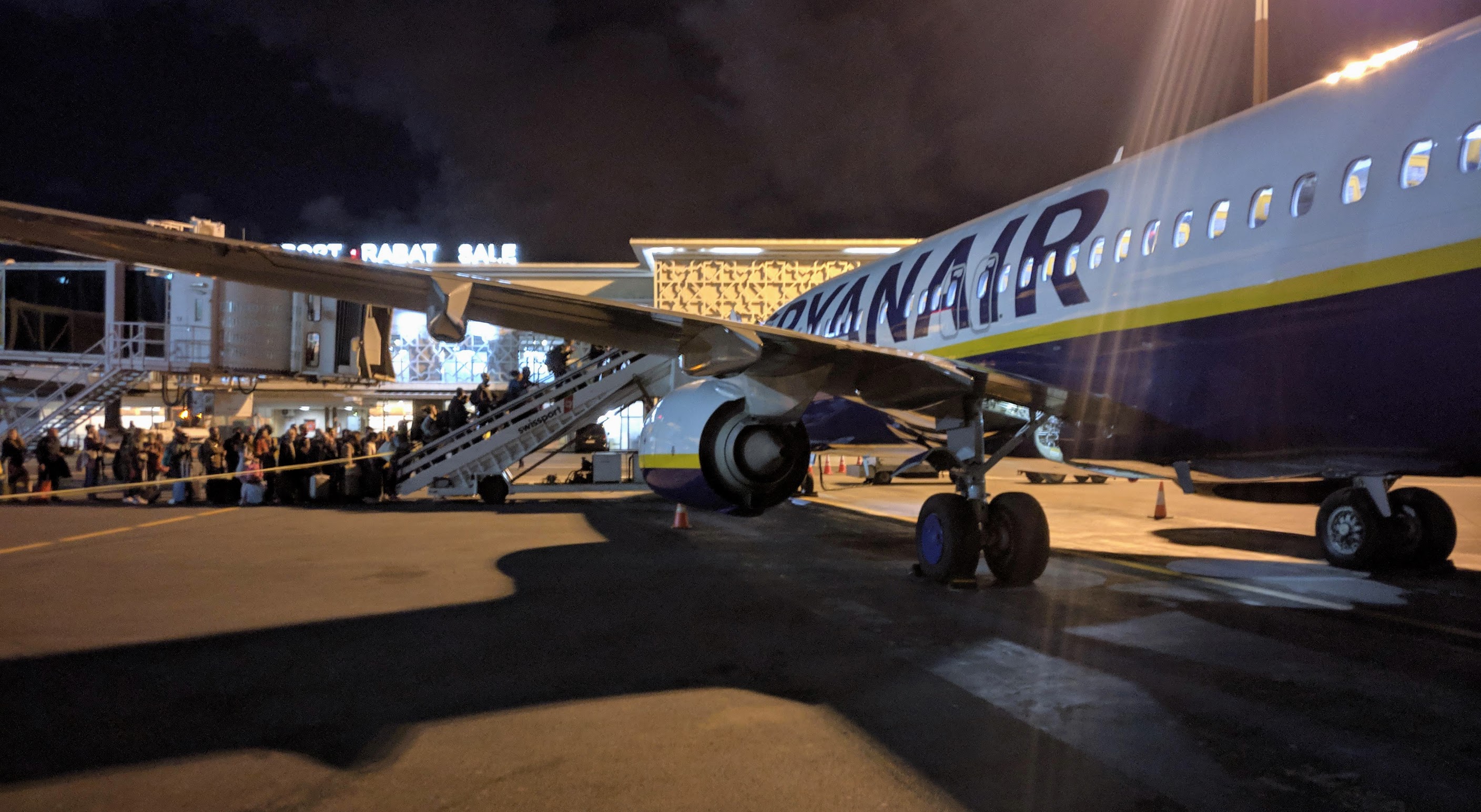 Airport security made a fit about some of the things I tried to bring back, including:

I’m not sure exactly what rules any of these are breaking. Luckily, they let it slide with just a warning.