Las Fallas in Valencia is a multi-week festival that was highly praised during pre-departure travel panels so I made it a point to visit.

Cuenca was right between them

It took me a long time to answer this simple question. My first impression was that it was the name of the statues that are the main attraction, but it’s a broader term that can refer to:

I didn’t get to stay for that part because it happens late Tuesday night and I had an exam on Monday.

It’s a huge part of the culture of the festival. Little kids run around with smoldering ropes, constantly setting off firecrackers of various decibel levels. Sometimes they set them off right next to you, or in a beer can or a fence post. It got really obnoxious really quickly. Parents don’t just allow their kids to do this—they encourage it and participate. It’s stressful not being able to escape the surprise explosions.

Every day at 2pm the city center erupts in a daytime fireworks display.

The first day I got lucky and was right near the center. The second day I slept in. The third, it was so packed I just barely got a view of the center.

I was glad I came prepared with earplugs. The five minutes of heavy duty explosives shakes your chest… and the earth. It culminates in a “terratrémol” (literally earthquake) of explosions.

It’s amazing how wide the radius of celebrations is. Even in the smaller nearby town I was staying in, every single street was draped with celebration flags and there were a number of local fallas displays.

As such, the explosives were impossible to escape. Here’s what I woke up to Sunday morning:

Of course, the most important part. Being a huge festival, there were tons of street vendors with a variety of food options. I enjoyed the unholy marriage of baked potatos and middle eastern kebab one afternoon.

You can’t walk two blocks without finding a churreria. And these ones are good. Aside from your typical churros and porra, they features rellenos, a glorius stuffed sugary monstrosity filled with all sorts of unhealthy stuff (the best being Nutella).

The Kinder-culture here means Nutella in everything, which I am a fan of.

Valencia is the home of the famous Spanish dish paella (it means “pan”, I’ll let you figure out why). I met up with another ISA member on the first night to have proper Valencia paella, and then found some much cheaper on the last day at a street vendor. 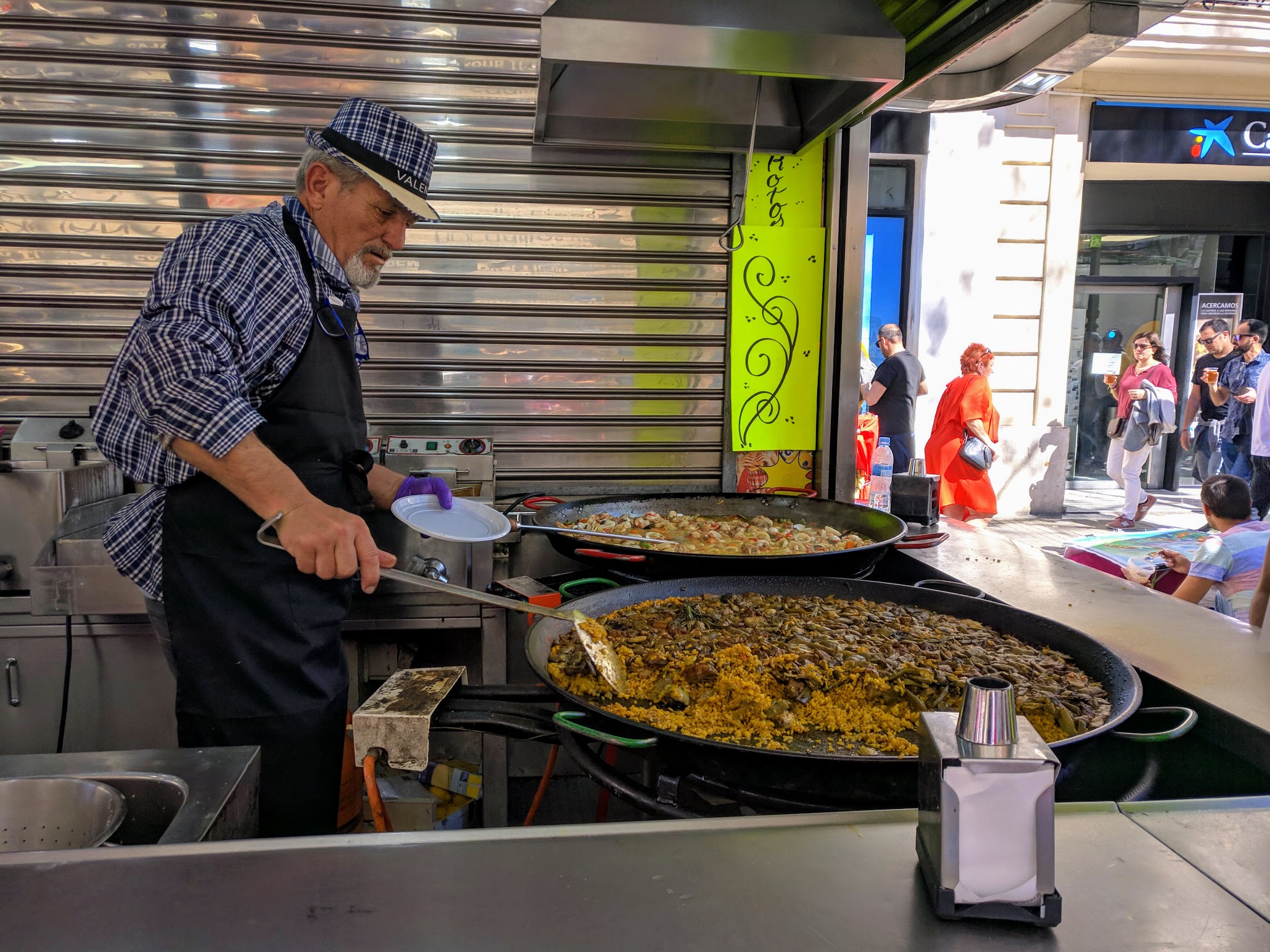 They’ve also got markets with huge displays of candy, such as these massive gummy ropes.

There’s a gelato shop here that claims to have the best gelato in all of Spain (they won some official awards) so I tried two of their winning flavors. One was a Nutella type flavor (go figure) and the other was I think called “Sicilian orange surprise” which had a very nice tart flavor.

Horcha con fartons (tee hee) was recommended by a local friend. Horchata is a cold plant based drink, tastes kind of cinnamony.

also not my photo

I stayed in the cheapest Airbnb I could find, $10 a night. The catch was that it wasn’t within walking distance, and transportation was a major headache. The staff at the transit agency were very rude and impatient with me, and falsely told me that I couldn’t use their service to reach the property. I ended up wasting money on a bus pass that I couldn’t even fully take advantage of, because all of the streets within the city were closed for the festival. 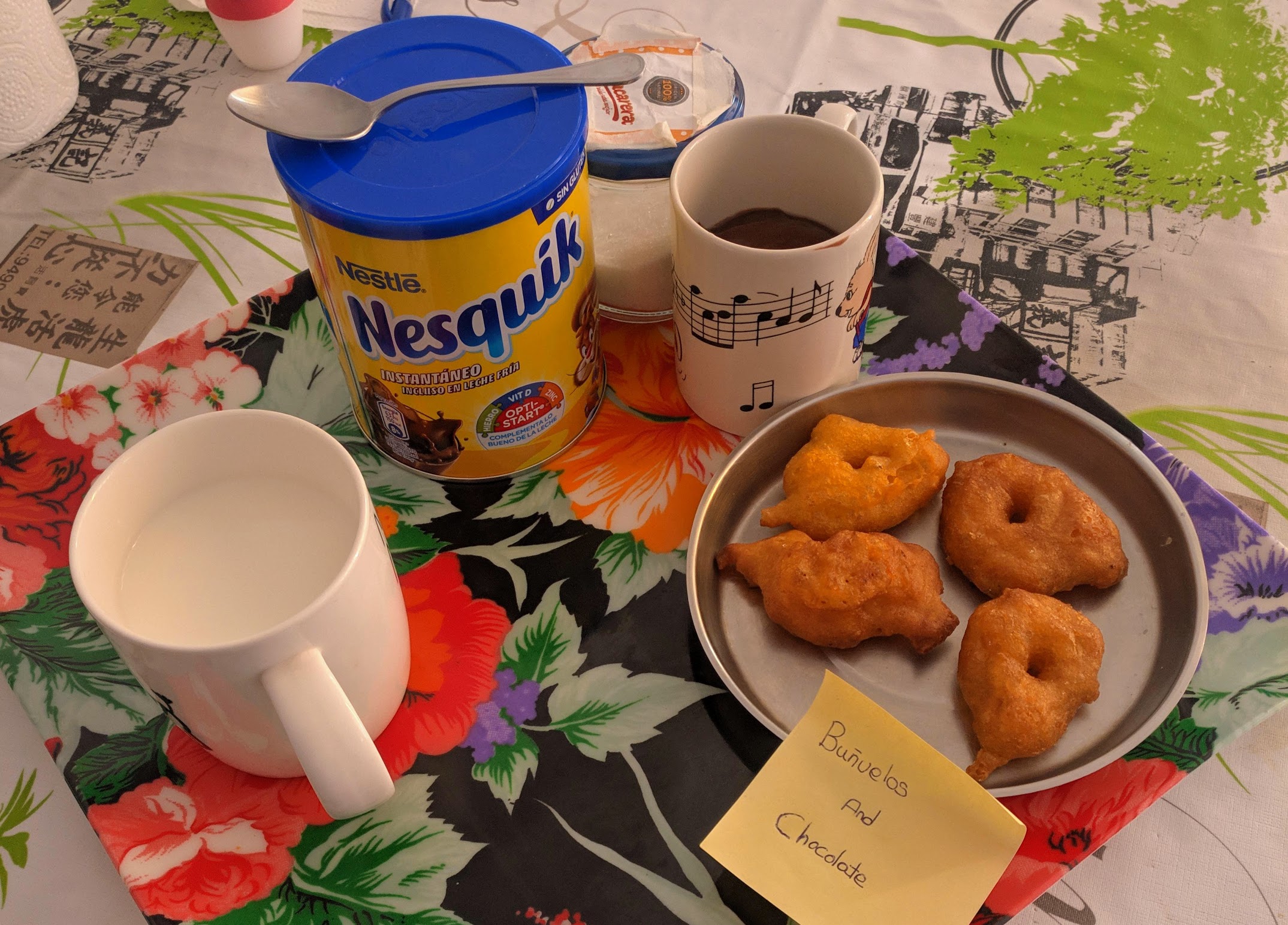 On Saturday I met up with a Spanish friend I had been chatting with online using my language exchange app. Her friend told me that this year the lights weren’t nearly as impressive as last year but I thought they were still very impressive.

Then of course there’s the fireworks. The second night I stayed around the Benétuser neighborhood and witnessed some smaller displays, but I could still see and hear the big city fireworks from afar.

I’ve never seen a city so alive (NYC on St. Patty’s was up there, but not like this).

I couldn’t believe the scale of these groups. I don’t know where they all got these fancy dresses. All of the girls had a fancy dress and the same Princess-Leia hairstyle, even the toddlers and babies in strollers (well, minus the hair for the babies).

There was an organized parade for a couple hours, and then aftewards all of the crews roam the city, dancing and playing music. It was really fun to see. Just look at how much fun these ladies were having:

This went on all through the night and they were back for another round on Sunday.